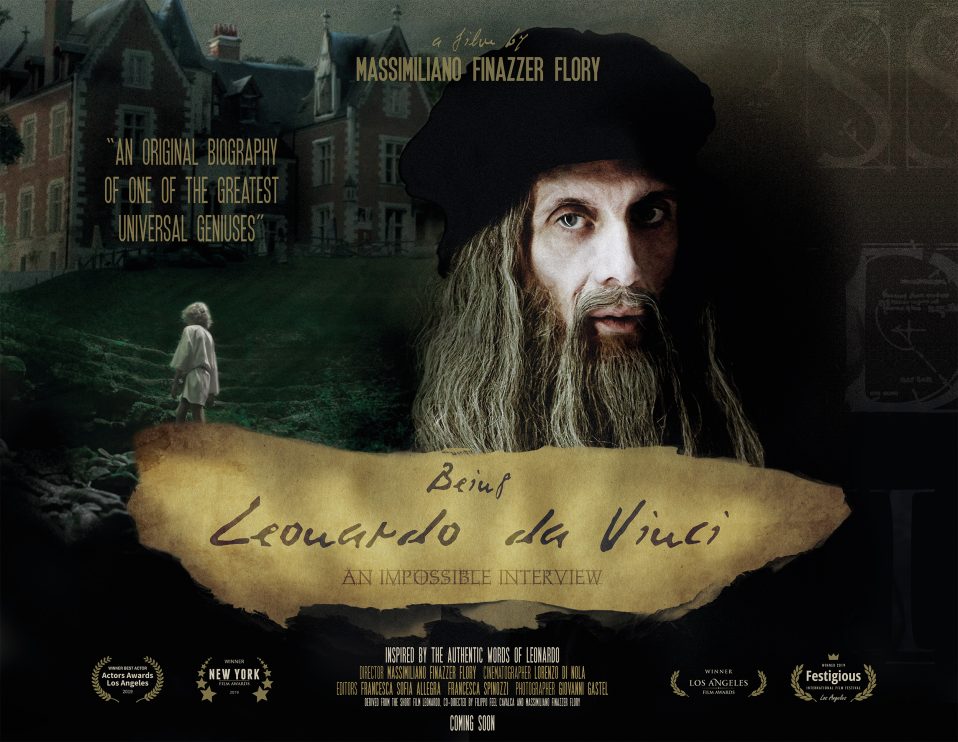 a film by MASSIMILIANO FINAZZER FLORY
In collaboration with RAI CINEMA

Based on the homonymous show of success, a unique movie dedicated to Leonardo da Vinci on the occasion of the 500th anniversary of the universal genius’ death, where sets and works of art are all authentic from the birthplace of Leonardo in Vinci to the Château Royal of Amboise and the final resting place where Leonardo passed away in Clos Lucé and even in Vigevano the Stables, the Undergrounds, the Covered Road, the Castle. In Milan: San Sepolcro, the Venerable Biblioteca Ambrosiana, the “Orti di Leonardo”, the Bramante Sacristy, the Sforzesco Castle, the Sala delle Asse, the State Archives where was filmed the only one autograph of Leonardo in the world. The Acquafraggia Waterfalls studied by the genius. And certainly Florence at the Officina Profumo Farmaceutica of Santa Maria Novella to stage the botanical side of Leonardo. Filmed between the United States, France and Italy, the incredible make-up of Finazzer Flory’s face and a choreographic recitation that embodies the body of Leonardo gives us back not only its history but also in directing terms the influence of Leonardo in our aesthetics cinematographic too.

A universal icon, 500 years after his death. A film that holds together the linguistic originality through the Renaissance language and the technological quality of our time.

Short synopsis: two journalists, from New York and Milan unaware of each other, are looking for a scoop about the 500th anniversary of Leonardo da Vinci’s death. They see works of art and they pass thorough the places of the Genius between landscapes and mysterious encounters. In Florence for the first time during a show in costume between friars, tourists and flag-wavers unexpected traces are found. In Milan, it’s discovered a document to find out who Leonardo Man was through a scientific examination. Then they come to his final resting place in Clos Lucé and they really meet Leonardo. The interview is granted. The words of the Genius are authentic, in Renaissance language. At the end Leonardo escapes through the undergrounds, returning to Vigevano and unveiling to the most important figures of his time where he tells …

International distribution in over 20 countries
Preview in Italy on April 14th  in Vinci at the Teatro di Vinci at 21:00
From April 15th  the movie will be distributed in Italian cinemas in collaboration with the Italian Federation of Cinema d’Essai
UNITED STATES: FilmFreeway distribution throughout 2019. Event on October 16th  at the “UCLA” University of California, Los Angeles.
SPECIAL EVENTS: itinerants events in cities related to the biography of Leonardo da Vinci or to his works of art: Florence, Milan, Vigevano, Vaprio d’Adda, Turin, Venice, Rome, Naples, Gradisca d’Isonzo, Bologna, Paris, Amboise, Clos Lucé, London, St. Petersburg, Munich, Krakow.
Participation in national and international film festivals
All information will be visible on the website: www.finazzerflory.com

Register for Event: BEING LEONARDO DA VINCI AN IMPOSSIBLE INTERVIEW

Your ticket for the: BEING LEONARDO DA VINCI AN IMPOSSIBLE INTERVIEW