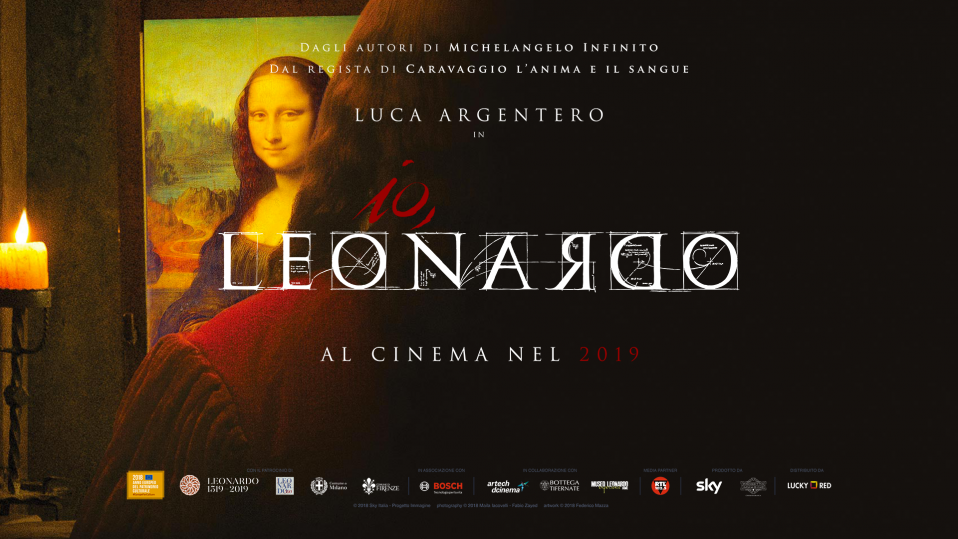 Art movie
“Amazing Leonardo” is the new art film by Sky made to coincide with the celebration of the 500th anniversary of the death of Leonardo da Vinci. Duration: 90′.
Scheduled to be in Italian cinemas in 2019, and on Sky and around the world in the following months. Duration: 90’ – Resolution 4K HDR
An original Sky production with Progetto Immagine. Distribution: Lucky Red (Italy); True Colours (Internationally)

Synopsis:“Amazing Leonardo” is an incredible story of the discovery of the man, the artist, the scientist, and the inventor through a unique journey, which is both involving and fascinating in its exploration in to the mind of Leonardo da Vinci, with a new take, very far from the usual stereotypes with which it is often described. The film tells the story of Leonardo da Vinci’s mind, which comes to life and takes shape, it branches out through analogies, visions and projections of his knowledge.. The Leonardo staged in the film “lives” in his mind, leading us “by the hand” within this wonderful world, that is the world of the artist’s thoughts. A man in constant search of the “spark” of knowledge, struggling, by mental analogies, with his visions, inventions, works and scientific theories, embracing all the main disciplines of the time, and thus allowing the viewer to better understand the ways in which the thoughts of Leonardo were developed.
This narrative choice stems from the awareness that to understand Leonardo it is essential not only to follow the non-linear evolution of his thoughts, but also to avoid considering and analyzing separately, the aspects of his technical-scientific studies and his reflections and achievements in the artistic field
“Amazing Leonardo” is a journey inside and outside the “mind” of the Tuscan genius, that also takes us to the places where he lived and worked, passing from his most famous works such as The Mona Lisa, The Last Supper, The Annunciation, Vitruvian Man, St. Jerome, The Lady with the ermine and the many Codes and drawings up to the work of recently attributed: Salvator Mundi. An excursus from Vinci, the birthplace of Leonardo, along the Valdarno to Florence, to Milan through the Po Valley and, finally, along the Alps, in France, to Amboise. A journey through the city of Milan, where Leonardo spent most of his life, will take us from the Axis Room of the Castello Sforzesco, to the Last Supper, until the discovery of the Codex Atlanticus kept in the Ambrosian Library.
The narrative and visual narrative of the film were constructed from numerous authoritative sources and under the supervision of the scientific consultant. More than 60 volumes and texts have been consulted by the authors and the director, which have also been a source of inspiration for the sets, costumes and the visual effects.

Cast: Luca Argentero (Leonardo da Vinci), Angela Fontana (Cecilia Gallerani), Massimo De Lorenzo (Ludovico il Moro), the storyteller is Francesco Pannofino; director: Jesus Garces Lambert; artistic direction: Cosetta Lagani; story: Cosetta Lagani and Sara Mosetti; script: Sara Mosetti and Marcello Olivieri; director of photography: Daniele Ciprì; costumes Maurizio Millenotti.
Scientific consultant for the film: Pietro C. Marani, tenured professor for History of Modern Art and Museology at the Politecnico di Milano, as well as President of the Ente Raccolta Vinciana of Castello Sforzesco di Milano and member of the National Commission for the publication of Leonardo’s works. He has to his credits numerous publications on Leonardo and other artists.
Under the patronage of the National Committee responsible for the Celebrations of the 500th anniversary of the death of Leonardo da Vinci and of the Scientific Committee of the Milan Leonardo 500 Palimpsest, of the Municipality of Florence and of the Municipality of Milan. With recognition being given of the European Year of Cultural Heritage 2018.

Your ticket for the: AMAZING, LEONARDO