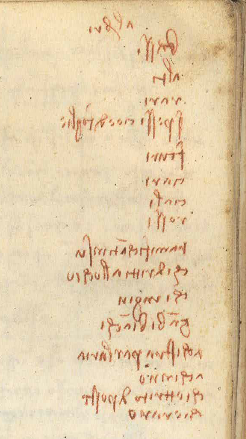 Leonardo da Vinci and the writings of painting in Europe: sources and reception<br/ ><br/ >
On the occasion of the Celebrations for the 5th Centenary of Leonardo da Vinci’ death (1519-2019), the two Conferences are the result of a team-work between the Inter-University Centre of Research on the Italian Renaissance (CIRRI) of the Sorbonne University (Paris 3) and the Department of Humanities of the University of Turin. The scientific managers are Margherita Quaglino (Turin) and Anna Sconza (Paris). The project is supported by the patronage of several major Institutions as the Accademia della Crusca, the Académie des Inscriptions et des Belles Lettres, the Commissione nazionale vinciana, the Centro di ricerca e documentazione leonardiana, the Politecnico di Torino. Our project includes two different events: the first in Paris (4-5 April 2019) and the second in Turin (27-29 November, see the program here-attached). We chose to adopt an interdisciplinary approach, which seems inevitable in the case of Leonardo, but which is actually not so common in the studies on his painting. The two Conferences should provide an opportunity for a real dialogue between specialists of different fields: Historians of Literature, Language, Arts and Restoration (please, find the thematic leaflet). The study on the words of painting allows connecting to Leonardo’s sources (the writer’s lost “library”), thought and technique, and the fortune of his writings in the later Literature, as well. Our project has therefore a very large chronological scope, starting from the second half of the 14th Century to the beginning of the 17th Century. These two events constitute the premise for an international research project, The Words of painting (Italy, 14th-17th Centuries), jointly organized by the Universities of Paris and Turin.

Your ticket for the: INTERNATIONAL STUDY CONFERENCE